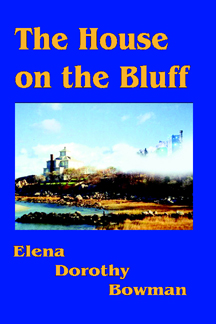 The last voice heard from the house was an 18th Century ancestor's blood-curdling screams in the dark of night. What was it about the "house" that made people tremble? Why had no one dared venture near it since 1789? Had it not been there for centuries, tall, empty, beckoning?
Abigail Adams Pierce could not envision that the information she stumbled upon would take her on a hair-raising journey she would never forget. A journey that once started would have no turning back, even at the risk of losing her life in the physical sense and being trapped within the spiritual realm, which had invaded the Pierce House. And nothing, in her wildest imagination, could have prepared her for the effect her discovery would have on her life from that moment on.

The first book in the Legasy Series - The House on the Bluff is available from: