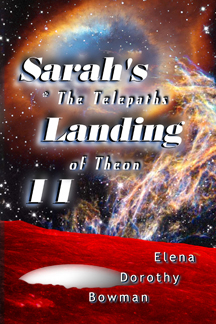 Torn by the plight of the people of the Planet Theon, his love for one of their daughters, and his alien son, the Earthling, Joshua, tries to reevaluate his dedication to his first love. His loyalty to the Theonians is questioned, endangering the lives of his Earth family. In his attempt to resolve his problem, he teleports to Earth seeking to inform his Earth love of the decision he must make for her safety as well as the safety of their son.
Traveling through space between Earth and Theon he is unaware of the pull towards the dark planet Crlllion until an internal alarm alerts him that the Barbarians are trying to divert his trajectory and bring him within their grasp. Unknown to Joshua his Earth son, Andrew, plans to spend his third birthday with his half-brother on Theon. His plan is to imitate his father and teleport to the other planet. It is a trip he has never made before…but his Father does it all the time…what could possibly go wrong?

Sarah's Landing-11 - The Telepaths of Theon is available from: